Let the word of Christ dwell in you richly … (Colossians 3:16) 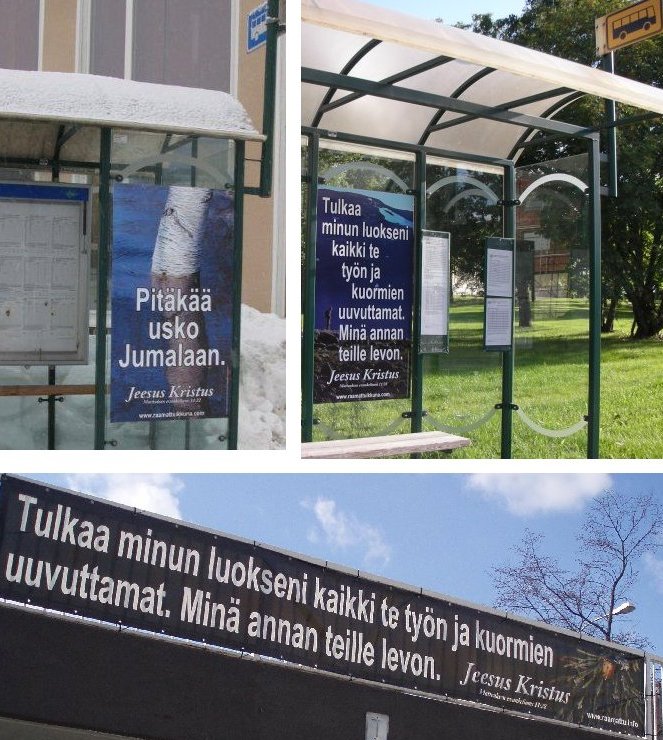 Maybe one day the word of Christ will richly dwell in the public places.

The doorbell rings. I open the door. There are two women.

One of them opens the Bible and reads a small piece of scripture to me. After some time the women leave.
Soon I realize that I do not have a very good idea about what they read to me. The words of the Bible fell on deaf ears in me.
Someone came specifically to me and read just to me the word of God and I took it with indifference.
I have noticed a similar lukewarmness and hardness of heart in relation to God’s word many time before.
These are two quotes from the Bible that describe me and people like me.

“… they were very amazed among themselves, and marveled; for they hadn’t understood about the loaves, but their hearts were hardened. ” (Mark 6:51-52).
“for this people’s heart has grown callous, their ears are dull of hearing, they have closed their eyes;…” (Matthew 13:15).

Sometimes I feel that the word of God is speaking something to me. Part of me is hardened more, some less.

“This Bible text has nothing to give me because I have heard or read it so many times before”, says some of my acquaintances when I show them photographs some Bible texts in public places.
Hardness in relation to biblical texts is a common phenomenon in us.

In public places everywhere there are vast amounts of commercial advertising because advertisers believe in the power of advertising.
Advertisers want to bring their advertisements to where the people are.
The texts of the Bible are not found in public places because we believe that the effort isn’t worth it.

The good news is that all current lukewarmness and hardness of heart is forgiven for all believers in Jesus because of His death on the cross.

This message is worth the effort to bring to public areas.

God had things to say. The message needed to be written on the very stones where everyone would see them. The message had to be written clearly and distinctly. The scripts were meant to remain visible in a readable condition from one generation to another. The purpose of the scripts placed in public places was to remind the believers of God of what the Lord had said. Read Deuteronomy 27:2-8.

Nowadays we live in a very different set of circumstances. Public places are full of the words of men all in all kinds of advertisements. Some of the advertisements even fight against the Bible’s values. The messages in text and picture form tell us to concentrate only in this (visible) world, and therefore take our thoughts away from the word of God. I think the real problem is exactly this, that the word of God is missing in the huge information flow in public places, in which we daily go and spend our time. People are moving in town and in other public places around the clock.

God still has things to say to us, to believers as well as to those who do not believe yet. Bible verses deserve to get permanent spots in our townscapes.

The task of a lamp is to light its environment as long as there is darkness. For to be useful the lamp needs to be where the people are. It is no use to anyone if the lamp is hidden away. For example it is useless to turn on the lights in a sauna for a night, if no one is going to use it.

The lack of God’s word can be regarded as spiritual darkness. In my mind it is one of the biggest problems in the world. Enormous amounts of people are moving every day outside their homes in public places, in which there is only darkness: the light of God’s word is missing. I guess that in Finland alone 4 million people are daily moving in public places.

The light of God’s word is among us. It should be taken from under the cover and put on stands there, where the travelers are, to shine light 24 hours a day, seven days a week. Public places are full of good stands. Currently those stands are almost 100 % for the use of the words of men.

Why not turn on the lights?

Thousands of people were gathered together with Jesus in a desert place. Then evening came and the people became hungry. One of the disciples of Jesus urged him to send the people away to buy some food for themselves. Jesus disagreed. He said to the disciples: “They don’t need to go away. You give them something to eat.” The disciples thought that Jesus’ order was strange, because feeding everybody gathered there would have been impossible. Soon it came out though, that one little boy had five loaves of bread and two fish. On request the boy gave his piece to Jesus, who blessed the food. The food became enough for everyone and there was even a lot of it left over. (Matthew 14:15-21 Mark 6:35-44 Luke 9:12-17 John 6:5-13)

“It is written, ‘Man shall not live by bread alone, but by every word that proceeds out of the mouth of God.’” (Matthew 4:4). So to live, a human being also needs God’s words. These days there are public places that are full of people, but seldom any words of God. We believers sometimes do go there and ask people to go find the word of God in our churches, in other words, we would like to send people to the word of God instead of bringing it to them. We usually do have a taste of it ( tracts with some quotations from the Bible) with us, which could contain anything from simple verses to an in-depth interpretation of those verses. While handing out tracts is certainly important, we could be doing more. In my mind we have also have a gross need for an action, an action in which people are not sent away to look for food but which brings substantial and nutritious food ( God’s words/verses of the Bible) to the public.

The little boy brought his piece of food to Jesus and after that there was enough food for the boy and thousands of other people. What if some other small person would bring one short verse of God’s word to a public place? Many would read the verse and perhaps through that text thousands of people could get spiritual food, which they very much need.

Let’s not send them away but let’s give them something to eat in the very place where they are.

Fire and a hammer

“Isn’t my word like fire?” says Yahweh; “and like a hammer that breaks the rock into pieces?” (Jeremiah 23:29)